My Training and Teacher 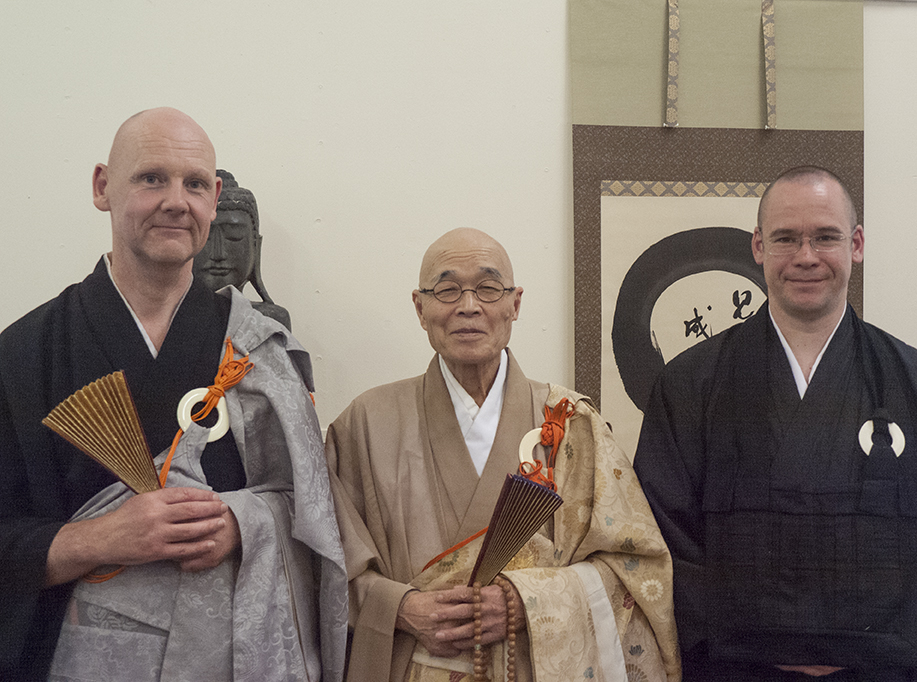 My teacher, Daizan Roshi, his teacher, Shinzan Roshi, Head Abbot of the Gyokuryuji temple near Gifu, Japan and myself after I had just taken my Jukai, Zen Precepts or lay persons vows, with them

I have been studying Buddhism for over 20yrs now, from an informal personal study at the beginning, building to an engaged study under a Zen Master more recently.

Around 18yrs ago I experienced a period of mental illness and it was the understandings of how the mind works, mindfulness, and meditation born from my study of Buddhism that got me through it.

In 2014 I was most fortunate to be able to attend the 33rd Kalachakra in Leh, India where, for 10 days, His Holiness the Dalai Lama gave teachings and initiations to over 150,000 people.

It was here, during meditation, that I had the realisation that I needed to be teaching meditation and mindfulness to others.

Upon my return I set about finding a teacher who could give me the tools and skills to be able to deliver something authentically Buddhist yet be able to cross the divide into the secular world and mesh with everyday life in a convincing way.

That person was Daizan Roshi of Zenways, the first British person to become a Zen Master in the Rinzai tradtion of Zen Buddhism.

I came away from my first meeting with Daizan Roshi knowing that I had just met the teacher I’d been looking for all my life.

I have since become a student of Zen under Daizan and, with his guidance, aim to teach the Dharma myself in the future.

This website uses cookies to improve your experience over time. You have the right to opt out if you wish. Unfortunately until full integration of this widget rejecting will take you to the Google home page. Please accept my apologies I endeavour to rectify this as soon as possible Accept Reject More Information
Privacy & Cookies Policy
Privacy Overview